The Age of Disengagement: Insights on a changing global economy

China Institute explored the short and long term implications of cratering U.S.-China investment and current moves to “decouple” the two economies in a far-reaching conversation on November 7 with experts Dr. Huiyao Wang, Founder and President of Center for China and Globalization-one of China’s leading Chinese think tanks, and Jacob Parker, SVP at the U.S.-China Business Council in Washington.

Below is a series of quotes designed to capture the scope of the discussion with moderator Dinda Elliott, SVP and Director of Programs and the Center for Business. The full event is available online and embedded below.


On the current mood:

Wang: “Chinese people still view the U.S. as very advanced and a friend for many years. [The current trade war] has taken many people by surprise.”

Parker: “The commercial relationship [between the U.S. and China] has always been the ballast. The U.S. business voice is quieter than it has ever been, and the void is being filled with military and strategic voices. This is a huge shift.”

Wang: “Investment in China- before it was around cheap labor. But now the market is mature. China has 400 million people in the middle class, soon to be 800 million. Overall foreign investment is on the rise but U.S. investment is slowing down.”

Parker: “New [U.S.] investments are going to Southeast Asia or Mexico, as companies [see] overexposure of risk to the Chinese market. Too much supply chain relied on China.

Parker: “Vietnam has a workforce capacity of 60 million people. [That is one city in China]. The entire capacity of the rest of the world is less than all of China’s capacity. There is an integrated supply chain now. You can move your supply chain, but it will take five to ten years.”

How do we get out of this mess?

Wang: “Find a new narrative. [The U.S.] needs to give up some ideological views on China—we have lifted 800 million people out of poverty, doubled their lifespan, China is responsible for 30 percent of world GDP for the last 15 years. It is a massive achievement. China needs better storytelling.”

Parker: “The biggest problem in the US today is that…the collective American society has lost faith …that the American version of capitalism can be successful when it is taken against a system like China’s state-driven capitalism. We have to rebuild the confidence we had domestically, and that means…ensuring we have worker retraining programs, and moving people to where the jobs are…Ultimately until we focus on the issues of why these problems have come to pass… The jobs that are no longer here—it’s not China’s fault, it’s because of technology. Until we are serious about what some of these core issues are, and can stop blaming China, I don’t think we’ll be able to come to the table.” 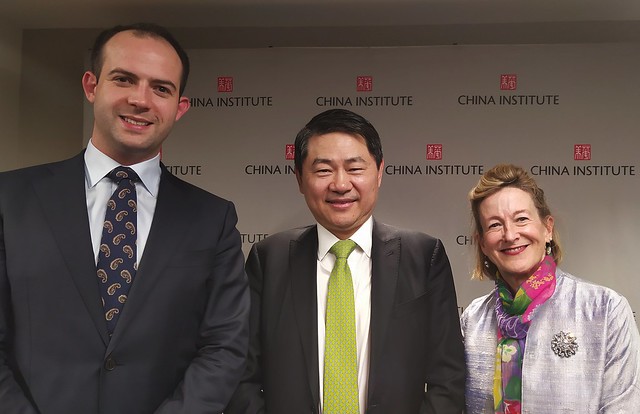