Ezra Vogel and Orville Schell on China: Is China the Enemy?

The current state of U.S.-China relations leaves much to be desired on both sides of the negotiating table. But, is the connection irreparably damaged and should the U.S. now look at the second largest economy in the world as an adversary rather than a partner? And, how can the U.S. learn to live with a rising China that is home to one-fifth of humanity?

The answers to these questions will have long-lasting impact on the future economies for both countries and all their inhabitants. Looking to identify pathways towards a shared future instead of one characterized by contention, China Institute hosted a conversation on September 17 with Ezra Vogel, the eminent Harvard professor and author who has trained many of America’s top China watchers, and Orville Schell, author and director of the Center on U.S.-China Relations at the Asia Society, moderated by Joe Kahn of The New York Times.

If you believe certain headlines and the rhetoric from Capitol Hill, China is a trading partner that, as the country has grown more prominent on the world stage, has co-opted and circumscribed American interests while enhancing its global hegemony. This has created a widespread climate of distrust. “Things are teetering…the conceit over the last few decades was engagement,” says Schell. “Many people now think we are diverging and we are struggling to find a new balance.”

But, is China the enemy? Vogel, who co-authored an open letter to Congress, published in The Washington Post, argued that it isn’t. He also argued that the U.S. policy of engagement has not been a failure, as some experts suggest. “Engagement has worked,” he stressed, pointing out the successful business relationships and the intangible ways in which Chinese society today is so much more open than it ever was. Yet, he acknowledged that “the mood has grown so anti-Chinese…[and] the Chinese know it. Many who are open minded think we are treating them like an enemy. The danger is an escalation of what that means.” Vogel suggested that China’s economic and geopolitical influence make the country a “rival,” not an enemy. More importantly however, “rivalry cannot be bounded by [the current] antagonism.” Schell agreed, as calling China the enemy means “supposing that [we are at] the end of the game.”

How did we get here? Vogel and Schell agreed that there have been missed opportunities on both sides. According to Schell, “It is like watching a Greek tragedy unfold. You head to the cliff, and over you go.” He argued that we need better leaders on both sides to ensure continued dialogue. Vogel suggested that the U.S. State Department could be deployed to start these conversations. And those talks should be soon, he added, because “[China] has already begun to replace the U.S. in world infrastructure spending, trade deals with other countries, [as well as] growing political impact.”

Is China becoming an expansionist power? China “is not like the Soviet Union,” Vogel said. “They don’t want to invade other countries…they see reactions in Hong Kong, Australia, the U.S., and they worry.”

Vogel added that if the current impasse continues without any recalibration of rhetoric, there is a real danger that we could move into a Cold War-like scenario. But what happens after the U.S. “decouples” from China, as many policy makers are advocating? Vogel and Schell both agreed that such an outcome would be damaging for both the U.S. and China. “The relationship with the U.S. was an incredible advantage for China,” said Schell. “How is it in their interest to dismantle engagement?”

The talk ended with an uplifting comment from Vogel: “We need China. Decoupling is impossible. We have to work together.”

By Jeremy Willinger, Director of Marketing at China Institute


See Photos From the Event: 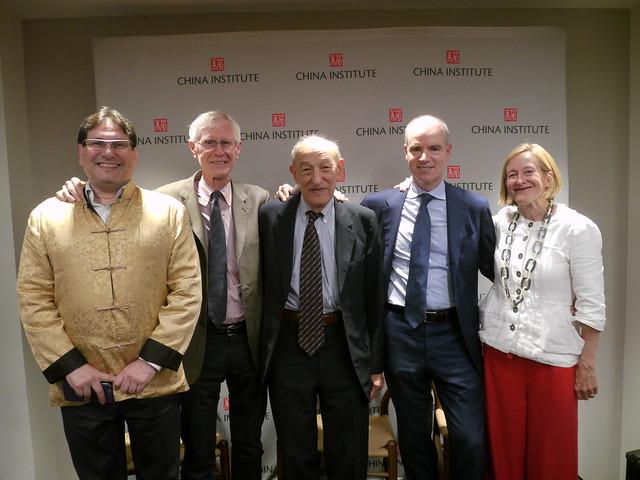