Jung Chang on the Family That Changed China

“I write all my books to find out more about my subjects,” said Jung Chang, acclaimed author of the memoir Wild Swans, Mao: The Unknown Story, and Empress Dowager Cixi, during a conversation at China Institute on November 5 with writer Richard Bernstein to launch her new book, Big Sister, Little Sister, Red Sister. The book tells the story of the Soong sisters, whose families and marriages changed the fate of an embattled China through civil war and revolution.

The event kicked off with a slideshow presenting the lives of the three sisters, who married the most powerful men of early 20th century China (Big sister Song Ai-ling married H.H. Kung, the wealthiest man in China; Soong Ching-ling married Sun Yat-sen, founder of the Republic of China; and little sister Soong Mei-ling married Chiang Kai-shek, president of the Republic of China.) Chang weaved in her own story on becoming a writer after being exiled to the Himalayan steppe by her father’s persecutors to work as an electrician, barefoot doctor, and other manual jobs. It took a move to Great Britain and a reunion with her mother to develop her confidence and abilities to tell the stories of China and bring selected tales of extraordinary lives into focus.

The Soong sisters, whom Chang referred to as Big, Little, and Red (Song Qingling aligned herself with Chairman Mao and the Communist Party after the death of her husband), entered into fateful marriages that dictated lives of shifting alliances and, ultimately, a shattered family. “Though I was writing about the Soong sisters, in the back of my mind, there was always China,” said Chang, who seeks to illuminate much of what—and who—has shaped the country’s history.

We invite you to learn more about the Soong sisters by picking up a copy of Chang’s new work Big Sister, Little Sister, Red Sister: Three Women at the Heart of Twentieth-Century China (and support China Institute via Amazon Smile), and/or by watching the full video of our talk below: 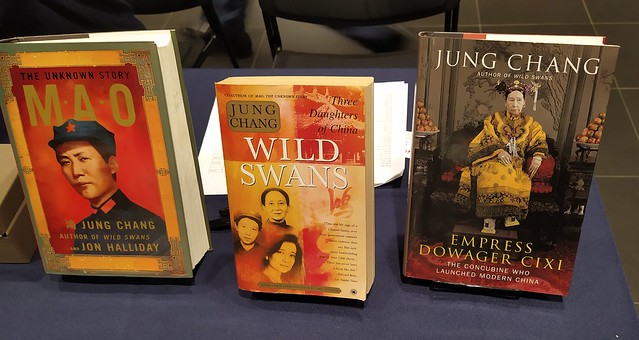 Video of the Full Program: