Out of the Shadows: A puppet performance at China Institute with Chinese Theatre Works

Shadow figures danced across the screen and performers shared fascinating folklore at China Institute on Wednesday, June 12 as Chinese Theatre Works presented their award-winning original shadow play, Tiger Tails 老虎的故事 and led a discussion regarding the work of their Shadow Restoration Project. The organization strives to preserve, create, and foster interest in Chinese Theatre Culture.

As the screen lit up, the leather shadow figures, painted with translucent dyes, came alive, while the plethora of voices from Stephen Kaplin provided both levity and dimension to the story. The talented performers blended traditional Chinese and modern Western techniques together to tell the story of an elder rabbit recounting four anecdotes from her past to her granddaughter. Each reminiscence was based on a Chinese idiom: “you create your own disaster by raising a tiger,” “working for the emperor is as dangerous as working for the tiger,” “survive from the tiger’s mouth,” and “the nasty bird took the other bird’s nest.”

After the thrilling tale expertly presented through the tradition of shadow puppetry, the program continued with a human panel of four scholars on the art form. Jo Humphrey; Kuang-Yu Fong, Executive and Co-Artistic Director; Stephen Kaplin, Founder, co-artistic Director, Arts in Education Director, Technical Director, Puppeteer, Teaching Artist; and Mingjie Li, Professor in the Folklore Institute at East China Normal University in Shanghai spoke passionately about the history of the shadow figures, how they came to work with the art, and why it is so essential to maintain and promote the tradition.

With a theatre background, Jo Humphrey originally worked for the Museum of Natural History helping mount their Chinese section, which included traditional shadow figures. As she developed this area, many people approached her expressing interest in seeing a performance. Unfortunately this was during the Cultural Revolution, and there was nowhere offering shadow figure performances, so she began to create a working database of individuals who shared her passion. That list grew to encompass a wider community which led her to found Chinese Theatre Works in order to offer a full slate of programs and works to engage this robust constituency. Her art proved much more popular than she originally imagined it could be.

From working relentlessly with a cotton swab removing the tung oil off the shadow figures to installing permanent exhibitions to performing all over the world, everyone at China Theatre Works has a genuine enthusiasm for capturing and maintaining Chinese theatre culture.

For anyone interested in tradition, storytelling, art, and mythology, shadow puppetry is an artform that deserves its time in the spotlight as an illuminating platform to share Chinese culture and history.

Photo slideshow from the event: 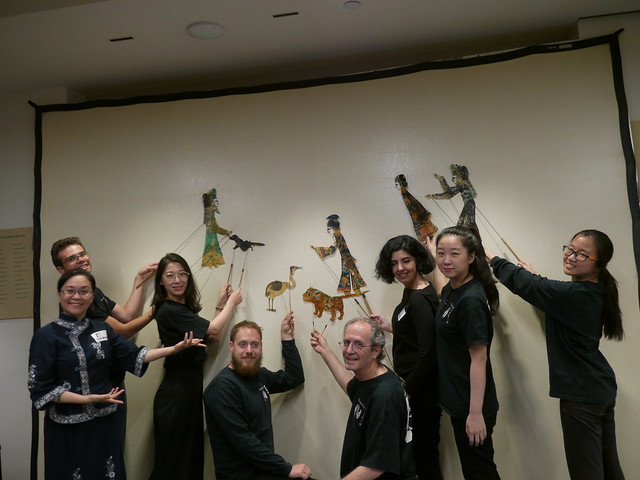 Video from the event, including introductions, excerpts from Tiger Tales and the post-performance panel discussion: