“Marriage is a wind chime in China. So much can be inferred by process.” -Roseann Lake

Contemporary Chinese couples have gone beyond the passport sized, black and white singular images from the Cultural Revolution and now stage elaborate, all-day photoshoots at wedding photo studios involving multiple costume changes, professional make up, and intricate sets representing classical European tableaus and even underwater scenes. Packages range from $300 dollars to $400K, with an average cost approaching a full wedding in the U.S. ($20-30K); the pre-wedding photo industry in China is worth $80B, on par with the global Search Engine Optimization (SEO) industry or the entire American cannabis industry.

This phenomenon—which sits squarely at the intersection of the rise of the Chinese middle class and cultural tradition— has been captured in a new, touching documentary, “China Love,” by director Olivia Martin-McGuire (OMM), that also served to contrast the spare, unemotional nuptial experiences of couples during the Cultural Revolution and those today, as tradition meets commercialization. The film documents elderly couples who dress up for elaborate pre-wedding photos with the help of a Shanghai nonprofit community organization—and captures their painful memories of the Cultural Revolution, when such things were not allowed.

China Institute hosted Martin-McGuire for a screening and panel talk with Economist correspondent Roseann Lake (RL), who wrote Leftover Women, on November 19. Below, we present selected quotes, as well as photos and the full video from the conversation:


How did the documentary come to fruition?

OMM: “It started as photos. I was walking on the Bund and saw 15 couples taking wedding photos. It was like a white rabbit moment. …It was a window into contemporary China that offered all [these] different layers.”

On individual vs. collective:

OMM: “The [style of] photos explore romance from the West. It is a reflection of us, the individual. It is linked to consumerism, it’s marketed. Marriage is about family and the collective.”

OMM: The [older couples] dressing up is “an opportunity to be in the spotlight, to be an individual.”

On the societal/filial pressures to be married:

RL: “Many feel pressure to get into marriage. So [the photos] look good on the wall but inside…”

OMM: Not being married “is not acceptable.”

On what photos reveal about men vs. women:

OMM: “Men put up with more in China—so much of the ceremony [around the photos] is for the women. …There was a lot of play involved. In Australia, you wouldn’t dress [in costumes] as an adult.”

On the echoes of history:

OMM: “Everything led back to the Cultural Revolution—for everyone [in the film]. It is still present in various, different ways.”


Photos From the Event: 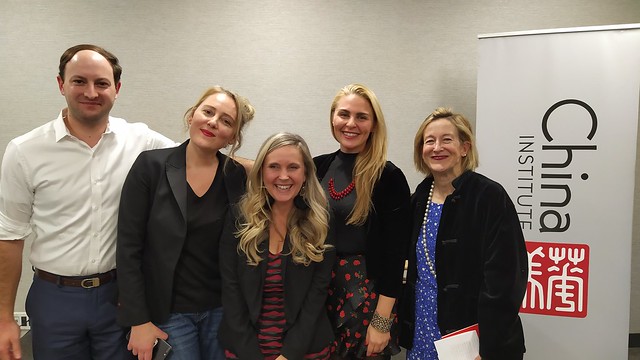